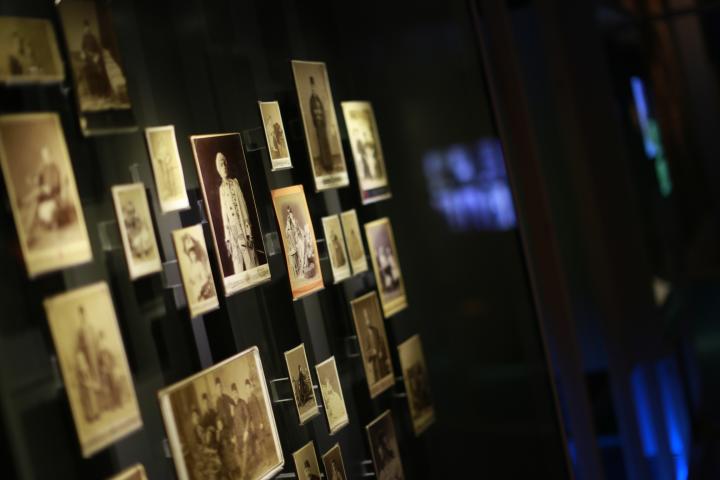 Apollon, Basile Karcopoulo, Phébus, Nikolas Andriomenos, Sébah & Joaillier, Abdullah Frères. Their business cards rigorously in French, displayed along with a selection of portraits taken in their celebrated studios on the Grande rue de Péra (today’s Istiklal caddesi, in Beyoğlu), welcome visitors to the new exhibition at the Research Center for Anatolian Civilizations of Koç University: “Camera Ottomana. Photography and Modernity in the Ottoman Empire, 1840-1914”. But as professor Edhem Eldem – one of the curators – explained to Time Out, “the project goes well beyond canonical histories centered on Istanbul’s studios or Orientalist clichés and based on a very selective choice of examples”: “together with Zeynep Çelik and Bahattin Öztuncay, we looked not only at the production of photographs but also at their circulation as postcards or in the illustrated press and at their reception by the masses”.

Indeed, Camera Ottomana’s centerpieces are a few albums from Ömer Koç’s private collection, shown here for the first time and digitalised (they can be browsed through touchscreens), which testify to the empire’s efforts at modernization through infrastructural projects and industrial accomplishments: the Hijaz railroad to Mecca and Medina, the new Galata bridge built by a German firm in 1912, coal mines on the Black Sea coast, surgeries performed at Haseki Women’s hospital in Istanbul. The Sultans wished to prove to Westerners, as professor Eldem writes in his essay in the accompanying book, that their domains were “modernising rapidly and inexorably”. Don’t be surprised, the Ottomans were not as backward as generally thought. In any case, they were not successful: and “the West kept on “sticking to a specific repertoire of images consistent with its own preconceptions”, “from the exotic to the erotic”. A few examples of blatant distortions and manipulations from the French illustrated press are presented in the last section of the exhibition, “Disseminating images“.

Nevertheless, Camera Ottomana couldn’t do without a chronological introduction, which details the prominent place of the imperial capital in the history of photography: the first studio was opened by the Italian brothers Carlo and Giovanni Naya already in 1845, only six years after Monsieur Daguerre invented photography; other foreigners – Germans, British, French – soon followed, bringing with them the most up-to-date techniques. Some original specimens of daguerreotype, ambrotype, calotype, print on albumen paper, photolithography, tintype, and stereography are displayed to exemplify the breathtaking pace of photography’s evolution in Istanbul. Those pioneers at first specialised in portraits of Ottoman dignitaries – even Sultans and other members of the imperial family – and rich bourgeois (Westerners or westernized), but as the studios multiplied, they started to add landscapes, monuments, and local “types”, from street vendors to dervishes, to their portfolios; later on, the colourful atmosphere of belle époque Constantinople, with cafés, theaters, beer gardens, and elegant promenades, became central in their activity. Staged photographs gave gradually place to real life, with a vast variety of themes and genres and of immense aesthetic and documentary value, as many photographs in the exhibition demonstrate.

But photography didn’t stay on the Bosphorus: as a big wall map shows, studios quickly spread to Anatolia and to the provinces, from the Balkans to Egypt and Syria. They were managed mostly by Armenians and Greeks; even Viçen Abdullah, the founder of Abdullah Frères and the first court photographer, was of Armenian ancestry (and originally called Abdullahyan). Edhem Eldem would have loved “to study the work of indigenous photographers, immune from Western and Orientalist influences”; unfortunately, because of the tragedies of the First World War very little of that huge heritage reached us, one exception being the spectacular archives of the Dildilian borthers, Armenians from Merzifon in the Black Sea Region. A story that will never be told.

As a consequence, the curators had to concentrate on something else. Since their approach is systemic, they chose to study and exhibit two fascinating series of pictures, all digitalised. The first is a gallery of “bad boys”, hundreds of convicts portrayed beginning in 1888 in a studio managed by Kargopoulo, Abdülhamid’s court photographer, inside a prison in Istanbul. They were not subjected to today’s standard procedure of a facial and a profile shot, but were depicted in full length or three quarters. They don’t wear prison uniforms, but most of them are in chains and shackles; captions establish crimes committed and sentences received. They look intently at the camera, some of them even defiantly. The second series is made of around 6000 images of the Imperial Ottoman Bank’s at the turn of the century: all full length, showing an incredible array of national, ethnic, religious, cultural and social peculiarities.

Even though the display is professionally and meticulously arranged, space in the main gallery is very limited: and many more albums from Ömer Koç’s collection could be presented only in the book. Professor Eldem thinks that they should be permanently exhibited in a museum of photography. On the other hand, after its closure on the 19th of August, Camera Ottomana will travel to Washington, probably at the Smithsonian; it may even go as far as California, at the Getty.