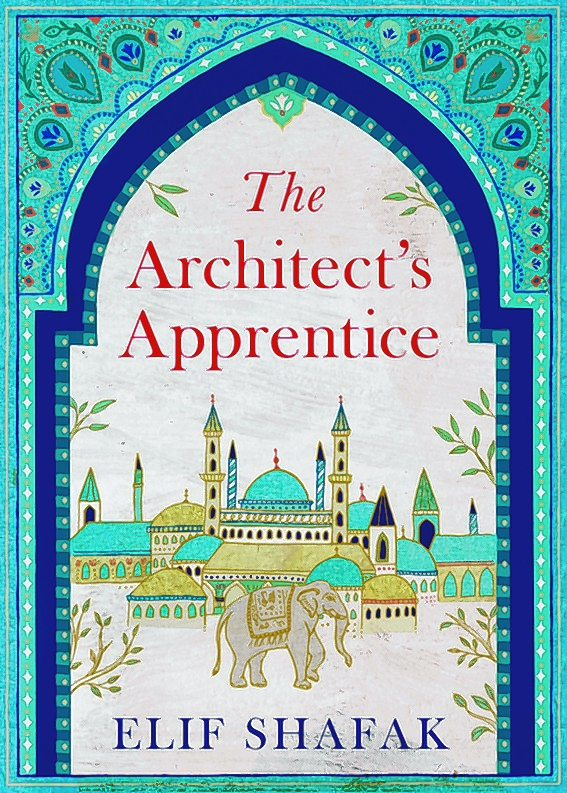 The Architect’s Apprentice (Viking, 2014) is the ninth novel by Elif Şafak, one of the most read and celebrated – internationally as well – of the new generation of Turkish authors (she was born in 1971). It was written first in English like The Bastard of Istanbul and The Forty Rules of Love, so it is not a translation even though it was published one year before in Turkey, as Ustam ve Ben (My Master and I).

It is a very hybrid and complex novel of 455 pages in which different genres coexist and inter-mingle. It is first and foremost a”novel of formation”, that of the 12-year-old Jahan who comes to Istanbul from India to bring a white elephant – Chota – as a gift to Sultan Süleyman. He enters the Palace to steal jewels as ordered by Captain Gareth, but he becomes instead the official elephant-keeper at Topkapı’s menagerie (“while full of ferocious creatures, it was, all in all, no wilder than the city outside”). He meets the Chief Royal Architect Mimar Sinan on the battlefield and is then chosen as one of his apprentices. “There were six of us: the master, the apprentices and the white elephant. We built everything together. Mosques, bridges, madrasas, caravanserais, alms houses, aqueducts…”, Jahan writes in a final letter summing up his life.

And so the novel recounts how the most magnificent monuments and marvels of engineering of the Ottoman classical era – Şehzade Camii, Süleymaniye Camii, the new system of aqueducts and reservoirs – came to light. Elif Şafak details in a very vivid way the techniques employed, the relentless efforts of masons and carpenters, the genius and knowledge of Sinan founded in the three “fountains of wisdom” (books, work, and roads/travel), the influences of the Italian Renaissance that had rediscovered the lessons of the Roman architect Vitruvius (“forza, utilità, bellezza”; strength, use, beauty). The chief architect even sends his favourite apprentice to Roma to meet Michelangelo. “Things are written in water over there, except the works of my master, which are written in stone”, Jahan thinks of Sinan’s legacy.

But The Architect’s Apprentice is also a love story: an impossible and never fulfilled love story, that of Jahan and Mihrimah Sultan (the daughter of Süleyman and Hürrem/Roxelana) for whom he designs the beautiful mosque on the Bosphorus in Üsküdar and whom he loves until the end of his life (“She is the shadow that follows me everywhere, towering above me when I feel low, draining the light from my soul”). It is a fable, full of enchantments and spells, of eunuchs and seductive oriental pleasures. It is a detective novel, full of intrigues, extremisms and savage violence, fights for raw power, coups de théâtre, treacheries. It is a picaresque novel, in which Jahan shifts continuously from the privileged Palace to taverns and prisons; amazing and exhilarating adventures take place whenever he happens to meet – that is, quite often – a tribe of gypsies he befriends (even Chota gets drunk with rakı). But even if the characters are sketched with verve and the pace of the narration is pleasantly energetic, after a very brilliant and promising beginning the plot gets excessively fragmented and the developments are hard to follow (the reader’s focus is diverted by many brief and inconsequential episodes, unrelated to the main story).

Elif Şafak’s book is ultimately a novel of Istanbul: “[a] city so vast she expanded left and right, and up towards the firmament, striving to ascend, desiring more, never satisfied.” The Ottoman capital lives in front of the reader, depicted not superficially but in its true variegated, multi-ethnic, and multi-cultural essence: mosques, churches, and synagogues side by side; Jews, Armenians, Greeks, and Levantines and many other groups keeping their traditions and their dignity intact. It teems with outcasts living at the margins of society, some of them physically living in shanty-towns from time to time destroyed to make place to public buildings; Jahan is pushed to reflect on the role of the architect as someone – as the writer suggests – who must assure “the protection of the past from its future” (yes, it is a not-so-veiled critique of the present construction frenzy in Istanbul and its costs). In the end, the Indian elephant-keeper turned apprentice is cheated out of his rightful place as the new Chief Royal Architect and leaves the empire: he then travels the world and – as old as master Sinan, who had died at 99 – goes to Agra to build the Taj Mahal for another Jahan, the Mughal emperor. A (fictional) piece of Istanbul in India.