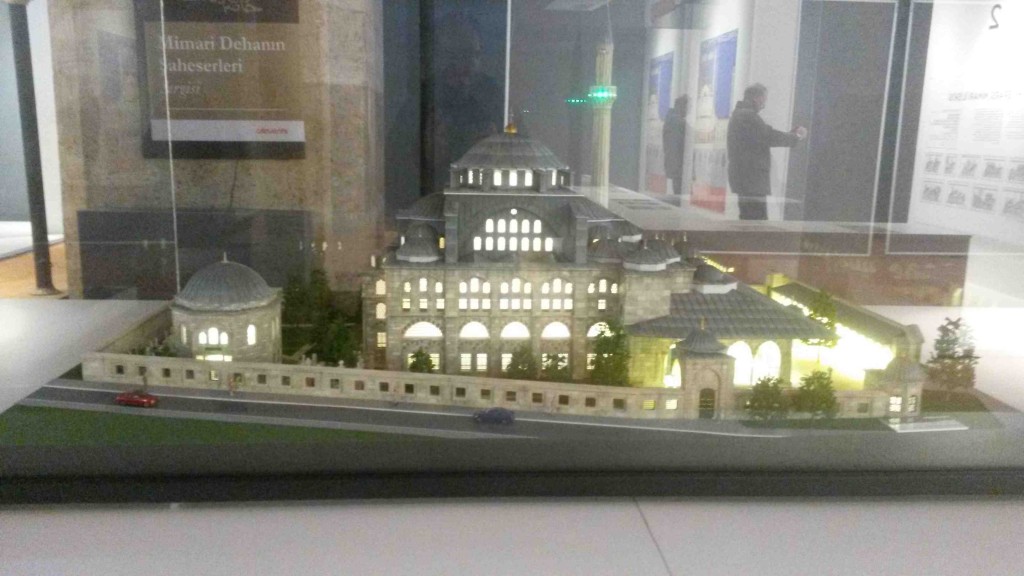 We still walk in the Istanbul built by Mimar Sinan, Sultan Süleyman’s chief architect in the XVI century. A versatile builder, engineer and town planner, Mimar Sinan’s domes and minarets punctuate the silhouette of the city on the Bosphorus. During the 50 years of his extraordinary career, he designed more than 350 buildings, mosques, hamams, bridges, caravanserais, all elegant and harmonious structures that span from the Balkan peninsula to the Middle East. His külliye (complexes comprising mosques, tombs and civic buildings) of Süleymaniye in Istanbul and of Selimiye in Edirne are two of his most remarkable masterpieces, and are both listed by UNESCO as world heritage sites.

Sinan’s exceptionally long life, that of a Christian of Cappadocian origins who became a Muslim Janissary commander and acquired fame and power before dying at the age of 99, has been recently fictionalized by Elif Şafak in ‘The Architect’s Apprentice,’ a novel in which the master’s craft and learning are the subject of deep admiration and jalousies. Recently, Cüneyt Karaahmetoğlu, a Turkish photographer, finalized an audacious film project titled ‘5 Centuries Later, 4 Seasons in Istanbul from Sinan Minarets.’ For a period of 12 months, he shot 170.000 frames of Istanbul from the minarets of 19 mosques built by Sinan and then turned the images into a 16 minutes movie. The result is breath-taking kaleidoscope of colors, lights, perspectives, clouds, roofs, bridges, trees, cars, boats and people in motion.

Karaahmetoğlu’s mesmerizing video can be watched at the new exhibition about Mimar Sinan at the Tophane i-Amire Culture and Art Center of the aptly named Mimar Sinan Fine Arts University, which is an old manufacture of cannons and cannonballs located in front of one of the Ottoman architect’s most refined works, the Kılıç Ali Paşa complex. Based on an engaging multimedia concept, the exhibition introduces us to the most celebrated of Ottoman architects through videos, touch-screens, 3-D animations, as well as the more usual reproductions of paintings, miniatures, and texts. After its Istanbul stop, the exhibition will travel to Ankara, Bursa, Kayseri, Eskişehir, and abroad.

‘Sinan and Masterpieces of the Creative Genius’ is a precious encyclopedia of knowledge for experts and a perfect beginner’s guide at the same time. Sinan’s life and achievements are meticulously explained with reference to the social, political, and cultural context of the second half of the XVI century, which the historian Gülru Necipoğlu called “the Age of Sinan.” For example, a parallel is drawn between him and the Italian architect Palladio as some scholars pointed out their respective influence because of similar-looking buildings and domes in Istanbul and Venice. A whole section is devoted to the architect’s patrons: sultans, princes, grand viziers, other high-ranking military, civil officials, and of course the princess Mihrimah (“sun and moon”), Süleyman’s favorite daughter who inspired Sinan’s most luminous mosque, spectacularly standing on ancient Constantinople’s highest point in Edirnekapı.

An interactive electronic map allow visitors to locate his numerous works in Istanbul, while a big panel shows a full chronology of his architectural achievements. Other monitors test the visitors’s knowledge by submitting them to puzzles, and questions about Mimar Sinan and architecture. In addition, a big screen projects maps and silhouettes, gravures and photographs, of the town before and after Sinan, to show his role as an urban planner. He both designed rational-geometric patterns, such as in the Süleymanye külliye on a hill where the central mosque seems to be protected from the rest of the city, and choose more functional approaches such as in the Şemsi Ahmet Paşa complex on the Bosphorus (in Üsküdar), where the characteristics of the environment are fully taken into account. At the center of exhibition hall, a 28 meter-long is packed with catalogues, all the writings and even the autobiography of the architect, a series of records documenting his professional activity. Blending history and technology, a 3-D printer reproduced small models of Sinan’s creations. It is this multimedia take, coupled with its impressive breath covering the whole architectural and engineering production of the first ever star-architect, that makes this exhibition ground-breaking and unique even though it is not based on any new scholarship.

Here is my personal suggestion once you have visited the exhibition: follow the footsteps of Sinan through the itineraries prepared by the Çekül Foundation in the scope of the “Respect for Sinan” project, a 20 year effort to preserve and make known Mimar Sinan’s legacy thanks to publications, inventories, and excursions. On their website (www.sinanasaygi.org) you can read the detailed descriptions of the itineraries – six in Istanbul and two in Thrace and Edirne – covering both his famous and less known buildings. In the end, what’s a better way to appreciate Mimar Sinan’s stunning architecture than to discover the buildings for real.