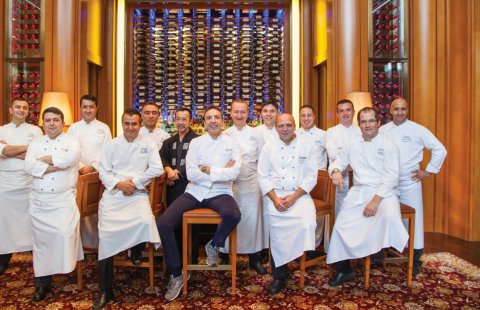 The Divan Group, a division of the Koç conglomerate (the largest industrial holding in Turkey) is an active part in the tourism sector, and its work with the Rahmi M. Koç Foundation for Museology and Culture have established one of the more interesting cultural experiments in Istanbul: high quality restaurants – every one with a peculiar identity: French, Mediterranean, Japanese, Turkish – associated with museums, research centers, and historical settings.

The division of labor is straightforward: the foundation and Mr. Koç in person have restored ancient buildings and opened private collections to the public, while Divan operates the culinary side of the business, thus concluding a virtuous marriage between enterprise and social responsibility. And whilst Divan is a traditional brand with a well-established clientele (the first hotel, next to Gezi Park, was inaugurated in 1956), the executive corporate chef Giancarlo Gottardo from Sicily has recently introduced touches of refined modernity and exuberant originality, “aiming for a gradual but substantive transformation by injecting old recipe and presentations with new flavors and sensations”. One case in point is the new and unified menu – 80% of the proposals are the same everywhere – for all 10 homed brasseries and pubs in some of the most beautiful spots in Istanbul, from Kalamış to Bebek – “but changes will be frequent, we want to open new roads all the time”, Mr. Gottardo told Time Out. The Divan brasserie, located on the terrace of the Merkez han building on Istiklal Caddesi – with breathtaking views of Topkapı and the Bosphorus – is coupled with the Research Centre for Anatolian Civilizations, a modern and functional complex with space for temporary exhibitions, a conference hall, an academic library, study rooms for researchers, a refectory and accommodations to host students.