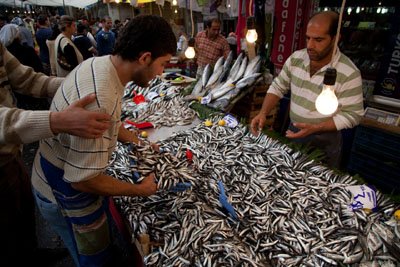 In fact, there are already 23 local branches of Slow Food in Turkey, with around 8000 members. Four are located in Istanbul, the first and most active – Fikir Sahibi Damaklar (“Tastes with opinions”) – was founded in 2007, has around 400 participants, and is chaired by Defne Koryürek. She is a former chef, and laments the fact that “although the city has a lot of culinary traditions brought along by immigrants from Anatolia, people are forced to eat basically the same industrial products”. They grew to fame in 2011, when they organized the first edition of the Lüfer Bayramı: a festival dedicated to the iconic bluefish (the “sultan of fish”) – celebrated in poems and novels – which is at risk of extinction due to the indiscriminate overfishing of juvenile exemplars. “If you lose the lüfer, you lose a big portion of Istanbulite culture,” she explains. They launched an extremely successful campaign, “asking the city’s consumers and restaurants to say no to fishing, serving and eating less than 24 cm in length” (the point at which they reach reproductive maturity). The results have been excellent and the stocks have begun to replenish.

In any case, Istanbul is a place of consumption and rather than production. It’s impossible to find any item from Istanbul in the Turkish Ark of Taste catalogue that is comprised of products like the Izmir tulumu or the Kars graviyeri cheese, the haviar (caviar from grey mullet fish) from the Aegean coast, the vasilaki, kuntra, çavuş, karahlana grapes from the island of Bozcaada, the pastırma of Kastamonu, or the hurma olive from the Izmir peninsula. There are only two “presidiums” in Turkey which are agreements between the Slow Food organization and small groups of producers to maintain the use of high-quality ingredients and traditional methods in exchange for greater visibility. One is for the tulum of the Divle cave near Karaman and the other for the bulgur cereal of Siyez near the Black Sea. Overall, it is extremely difficult to find any of these products in shops outside of their region of origin, even in Istanbul. An idea for the future, already experimented in Italy and some other countries, is to make a basket of products available to chefs who share the movement’s aims.

Beginning in November, a new application called ‘Slow Food Planet’ (available in Turkish, English and Italian) will suggest to tourists and locals alike all the places that use and sell authentic ingredients. A jury of experts came up with a selected list of esnaf lokanta, meyhane, available to view on an app, which also contains the best spots for kebab or soups or the most original boza (a drink made of slightly fermented bulgur) and turşu (pickled vegetables) makers. The app includes fancier restaurants such as Lokanta Maya, Mikla and Cibalikapı Balıkçısı that usually offer a variety of surprising fish starters, with unknown herbs and other culinary creations.
[…]