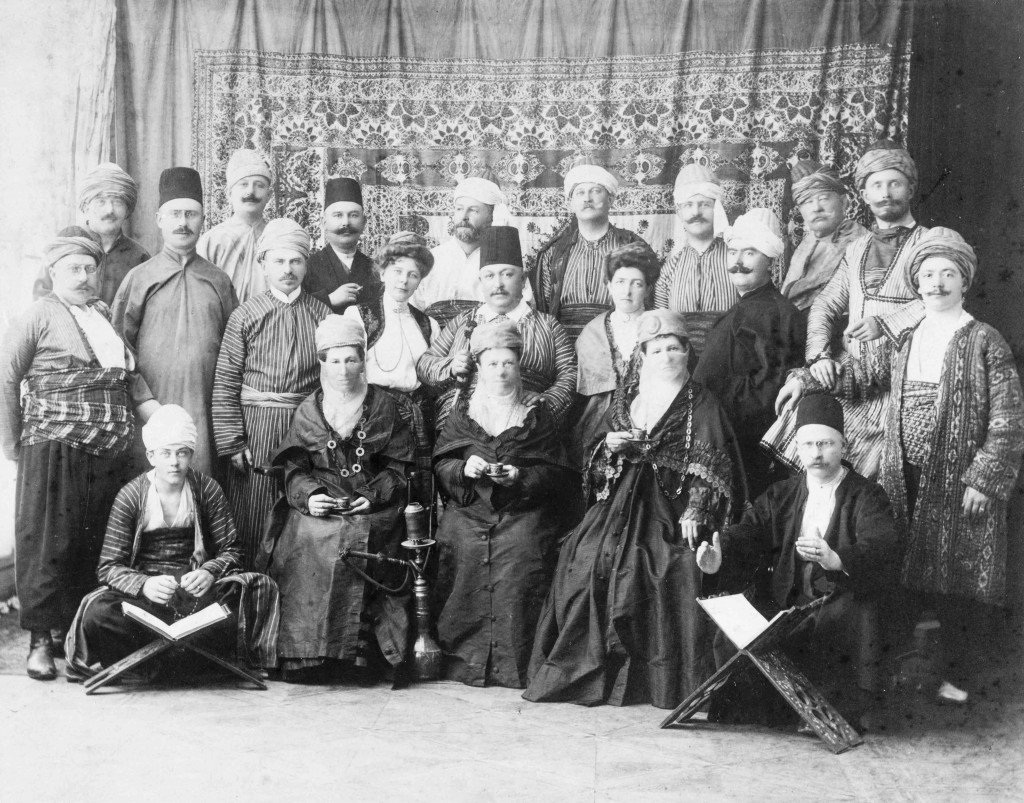 Mio nuovo articolo per Time Out, in edicola ad agosto.

Some things will never change. At the end of the 19th century groups of tourists already roamed Sultanahmet and the Grand Bazaar, petted – or were chased by – stray dogs, admired whirling dervishes, fantasised about veiled women in the harems, took pictures in front of Byzantine monuments, dressed and were photographed in Ottoman garments, browsed through guidebooks with mosques and minarets impressed on their covers, walked on the Theodosian walls, and cruised along the Bosphorus or to the Princes’ islands. Istanbul embodied the Levant, the East, the enigmatic and romantic Orient introduced to the learned society and the rich bourgeoisie by explorers and writers, by travelogues and novels. For many of today’s visitors, it still is.

The exhibition “Journey to the Center of the East, 1850-1950”, at the Istanbul Research Institute of the Pera Museum until the 17th of October (admission is free), recounts and explains – through photographs, postcards, posters, books and memorabilia – what curious crowds were looking for 100 and more years ago, by which means they reached the Ottoman capital, where they stayed, how they experienced the town and its surroundings. Similarities with today’s political circumstances and mass tourism are apparent; as Ekrem Işın – one of the curators – told Time Out, “Istanbul’s popularity has greatly increased in the last decade and it is once more the best candidate to be, so we thought that exhibiting the social, economic and historical aspects of the very same situation back in late Ottoman and early Republican times would attract locals and tourists alike”.

The materials shown mostly come from Pierre de Gigord’s specialised collection, focused mainly on cultural and urban images of Constantinople, acquired in 1996 by the Getty Research Institute and accessible online; it is one of the largest in the world with over 6000 photographs spanning one century and more than 150 photographers and studios represented. In the exhibition, the first public display of de Gigord’s collection (in fact, of a small portion of it) there are also numerous anonymous pictures, unique specimens taken by tourists themselves, labelled “pillagers of images” by Işın in his introductory essay for the catalogue.

“Journey to the Center of the East” is organised thematically. It starts with exotic and alluring illustrations of Istanbul as “an irresistible call” for the would-be visitors. It then presents the means of transportation progressively available: the trains “riding the railway tracks”, with an entire section devoted to the myth and luxury of the Orient Express); the steamships “sailing over the waves”; even the first planes and seaplanes adventurously “flying above the clouds”. It lets the dream turn into reality in the last room, showing how tourists enjoyed the comfort of a few renowned hotels such the Pera Palace and the Tokatlıyan, how their usually short visits were influenced by travel companies, tour guides, and the practical advice offered by guidebooks (especially on hygiene, apparently).

It is an exhibition on the history of tourism, which makes us understand both the difficulties and the rewards that “travelling East” entailed. People just off the trains – or the boats – look exhausted, but already enchanted: their first glimpses of the Orient were the Sirkeci station built in an exuberant Orientalist style, or the emaciated porters at the Karaköy harbour. They are impeccably or even immaculately dressed, women and men; their pith helmets on the other hand seem more in tune with a colonial, an Indian setting. They smile, invariably, when they are part of large groups in the Hippodrome square or pose in Ottoman costumes (veiled or mustachioed). Tourists had long ceased being discoverers, they had turned irremediably into customers seeking pleasures and curiosities.

This is why the advertisements displayed – of hotels, of paquebots, of the first airlines offering a regular connection – are much bigger and brighter than the serene composure of photographic reality, framed often in a modest 6×9 cm format; even Istiklal caddesi, back then “Grande rue de Péra”, is much larger, a replica of the Champs-Élysées. Constantinople/Istanbul, as presented in publicity posters and postcards, is picturesque by default: men in fez smoking and sipping coffee, veiled women, the sunset on the Boshporus. More oriental than the Orient.